Welcome to Our Online Superstore! 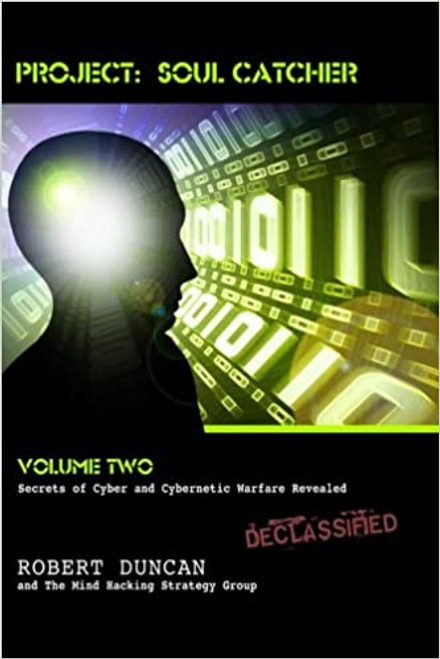 Robert Duncan is an ex-government scientist and whistleblower who has been blowing the whistle on dangerous technologies of control for many years.

He has been kind enough to allow us to sell signed copies of his books at a discount ( free domestic shipping ). How to Tame a Demon is signed with his signature.

All orders within the USA will be shipped via USPS Priority Mail with tracking. PLEASE MAKE SURE THAT YOUR NAME AND SHIPPING ADDRESS ARE INCLUDED WITH YOUR PAY PAL PAYMENT.

weaponize neuropsychology. It covers the art of bio-communication war. Human beings are complex machines but their inner workings have been deciphered. Mind control and brainwashing have been perfected in the last 60 years. Hacking computers and hacking into individual minds are similar. The 21st century will be known as the age of spiritual machines and soulless men.” – Amazon

This is my personal referral after reading Project: Soul Catcher

“After reading Project: Soul Catcher, I was able to identify the scripts in live time that are being used on me to control my mind.  I did not understand what ‘subliminal thoughts’ were until I read about the scripts that Dr. Robert Duncan described.  I was able to identify the mind control scripts on myself and call it out as false and rebuke it.  At that moment, the targeting shut down on me for a few days. I kept identifying and disabling the technology. Dr. Duncan describes, S.A.T.A.N., A.L.I.C.E., T.A.M.I, MEDUSA, Voodoo Doll, Noah’s Ark, C.H.R.I.S.T., Darth Vader Grip, memory probing, etc. are used on Targeted Individuals, including myself.

After using the Cyber Shield (invented in 2021), I was able to synergistically identify a script at the same time, and the technology disabled on my body. The definition of synergy is “a mutually advantageous conjunction or compatibility of distinct elements or participants.” Project: Soul Catcher is invaluable as a resource and tool in addition to the Cyber Shield to help reduce the EMF targeting.

Robert Duncan walked away from a lucrative position for obvious reasons.  He was apparently disgusted by the satanic alliances at CIA-DOD. He was disgusted that the satanic neuroscientists experimented without consent on innocent people, including children. I believe that Targeted Individuals are quid pro quo to the church of satan and Michael Aquino in exchange for teaching the satanic neuroscientists how to torture and kill. The targeting is a fulfillment of bloodlust and calling it eugenics.

Almost all flora and fauna are targeted today to destroy original DNA as God created it. As Dr. Duncan states, “. . . the robotization of humanity.” Anyone who is experiencing this vile form of targeting, must read Project: Soul Catcher. It is written from a brave and courageous man who wants to stop the evil.”  /Jax Domnitz

“5.0 out of 5 stars  A QUINTESSENTIAL READ FOR ANYONE WITH "HAVANA SYNDROME" OR A VICTIM OF NEURO WEAPONS SYSTEM ABUSES

Reviewed in the United States on May 5, 2021 by allaboutquality

This book explores and exposes the greatest atrocity being committed against humankind today AND NO ONE KNOWS ABOUT IT - THAT IS, UNTIL THIS BOOK! As this book describes in detail, the greatest threat to all persons is the little known or discussed weapons of mass destruction (WMD), also known to some as Directed Energy Weapons, Microwave Weapons, Neurological Weapons, brain to computer interfacing, or Silent Assassination Through Adapted Neural-networks (SATAN), etc. Dr. Robert Duncan has bravely come forward as a pioneer in trailblazing this cause to make known the covert governments global abuses of the WMD's, as they brazenly practice the development of these WMD's onto nonconsensual human subjects, torturing them - often to death, without mercy. This will go down in history as an unprecedented menticide and genocide of various cross sections of a diverse global demographic. Dr. Robert Duncan, is ahead of his time, and the whole world owes him a debt of gratitude for his unfathomable courage in exposing this, the greatest crime in human history.” – Amazon

The Mind has no firewall. Simply superb narrative of what to expect in the future. A great book detailing every aspect of psychological warfare. This book demystifies many concepts previously alien to a naive reader. The technology is out there and it is in use, unless you or anyone you know(highly likely)has come into contact with this deadly technology it is hard to understand how the system works.

"Inception(mind hacking),the movie was not a new concept." This technology has been out there(maybe not exactly the way described in the movie) but there have been serious attempts to hack into the human mind for centuries. With modern technology it has become easier than ever to hack into everything and anything. The human mind being no exception.

Firewalls for the mind and technology to protect the unsuspecting mind. It is a must read for anyone who is interested in cybernetics. Most of the information presented is declassified. Soul catchers is a great way to explain this technology. Millions of people are unknowingly being added to classified databases and are being segregated by these tech tools. Massive databases and everyone's life being scrutinized like never before. Creating a world of slaves and masters.

I highly recommend this book.